Wrong guy to ask. I ordered and paid for it 40 days ago and received it 2 days ago. I ordered it as a gift, that never came. I had a FedEx number from your confirmation, I made a claim through FedEx and they say, that number isn't in their system. It never left

I love all of the different color choices and the pigmentation is amazing. The shimmers don’t need to be packed on it is wonderful.

my friends gifted me the palette for my birthday and I was the happiest ever!! it's super pigmented and gorgeous, the shades are amazing, and for them to be selected and created by katya ...! 10/10 would recommend and will use everyday, it motivates me to create wonderful eye makeups and push myself further :) 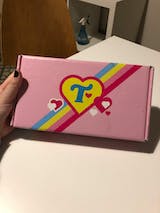 I never received it. And I paid extra for exposures shipping. I wrote to the company to tell them that it hadn’t shipped yet and when they got back to me they informed me that they were closed for holiday break so no orders were going out. They said they posted about it, so I guess that was their way of saying it’s my fault. But what I still don’t understand is when they came back from break and shipped my product, they didn’t ship it 2day air like I originally paid for, they shipped it regularly and it was set to arrive over a week later (which at this point was about 3 weeks since I put in the order). I’m still just confused as to why once they opened back up, they didn’t ship it 2 day air… because that’s what I paid for. I understand the holiday break, fine, but even then, why would those shipping options even still be available then? There’s a chance that not everyone will see the Instagram post or banner on the website that says no shipments during holiday break! Because some people don’t check social media and when some people are shopping they don’t look for things like that. Maybe it should’ve popped up when I was making the order as a reminder or something, I don’t know. It just felt like I got the bad end of the stick and I spent more money than I wanted to go get it expressed and the pa page was never delivered! I don’t know if it’s ups or trixie cosmetics but either way I still don’t have it and I’m waiting for an answer from ups.

Stunning, Fantastic, Amazing. The range of colours in this pallette is just so perfect! I love the balance of neutrals with fun colours, it’s the best pallette to take anywhere because you just have all of the options you need! Pigment is amazing, blend is gorgeous- no notes it’s amazing and you need it 🖤